The Friends of York Walls recently had an email request from Australia asking for help in identifying one of York’s “old gateways” visible in a 1944 photograph.

“Hello York Walls Friends. I was recently in York on a pilgrimage from Australia as my father and his Aussie crew were stationed at 466 Squadron in Driffield during WWII. On leave they often visited York. When their first pilot was killed on October 6, 1944 they were given 4 days leave in York to bond with their second pilot. We have a photo of the crew standing next to a Roman wall, on a cobbled street, taken on October 10, 1944. My friend and I spent half a day a few weeks ago wandering around and around the streets and gates of York, photo in hand, attempting to figure out where the photo was taken. We asked helpful locals but no one knew, and unfortunately, there is no one left to ask who can confirm the site, as all of the crew are now long-gone. In the end we had to admit defeat and headed to Betty’s to drown our sorrows in a delicious hot chocolate. We were wondering if anyone could assist us in locating the site that the photo was taken please.” 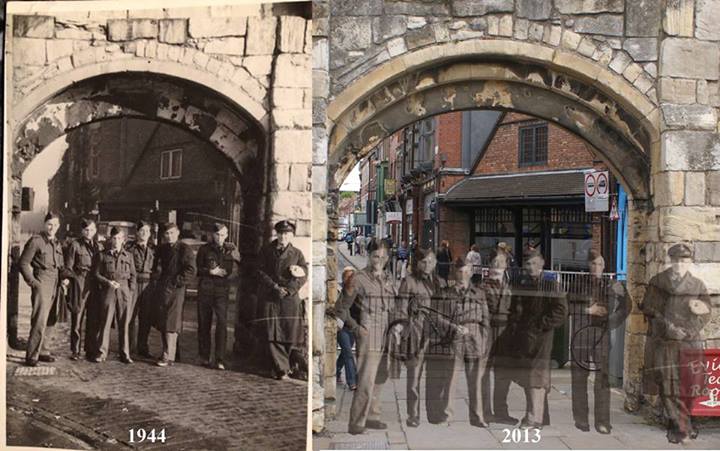 So we studied the scan of the old photograph, which Tiana had supplied and replied back –

“The location of the Mystery picture is solved ! We can tell you that your 1944 photograph was taken with the group standing under Queen Margaret’s Arch, in Exhibition Square, York.

This arch is sometimes referred to as Bootham Tower Postern and is attached to Bootham Tower which is on the opposite side of St Leonard’s Place road – across from Bootham Bar, a major Roman Gateway into York.

The photograph has been taken from the Exhibition Square side of the arch with a view down Gillygate visible through the arch opening. Today the arch looks pretty much as it did in your photo of 1944, a little cleaner stonework now perhaps, with Yorkshire stone paving instead of the stone setts, and the Gillygate buildings tidied up but seem to be only slightly changed. What a pity you didn’t find the location on your recent visit to York. You will have to come back again one day ! We have supplied a recent picture of the arch is attached.

The book “An Inventory of the Historical Monuments in City of York, Volume 2: The Defences (1972), pp. 160-173 “ says that :-
“Queen Margaret’s Arch is named after Margaret Tudor, daughter of Henry VII, who stayed in York in 1503. The arch itself was built in 1497 as a convenient back door to and from the Abbey grounds when a postern gate was made in the precinct wall near Bootham Bar. This is commonly called Queen Margaret’s Arch, due to an erroneous belief that it was made for the convenience of Margaret Tudor, the daughter of Henry VII, who visited York on 13–15 July 1503 on her way to be married to King James IV of Scotland. Details of her visit are preserved in the city records. There is, however, no doubt of the real date of the gateway as William Sever, Bishop of Carlisle and Abbot of St. Mary’s, in a letter of April 1500 to the Mayor of York, …. states the new work probably supplied a need for better access to the abbot’s house, which became the nucleus of the King’s Manor. The postern and adjoining tower still remain in a relatively unaltered state.”

Obviously Tiana was very pleased with the information we supplied, and explained –

“Thank you so much for your help regarding this. To know where the photo was taken is truly fabulous, and what a wonderful excuse to come back to my favourite city in the UK !!! …….. I look forward to standing exactly where the shot was taken, at the same angle, and then super-imposing the crew onto it …….

…… I am currently researching and writing a book on Dad’s war experiences. He wrote the first draft over many years and left it to me when he died. I began researching it a year ago and what a story it is. I have now met family members of the crew, had lunch and dinner with the two German Night Fighter Pilots involved in shooting them down, have visited the crash site in Germany with other relatives of the crew, friends, the local Military Museum Curator and the Mayor, visited his Sqdn Base in Driffield, been to the church that the survivors spent their first night as POWs in, had ANZAC Day with other vets from his Squadron, and am quite involved in the Facebook Friends and Family Group for No 466/462 Squadrons – Driffield and Lichfield’. My one-month epic trip was all about travelling in my father’s footsteps (and air steps), and boy, what a trip it was. Totally incredible. The only thing I did not achieve while I was in the UK and Germany was to find the York Gate, and now, with your help, we have!!!

The Friends of York Walls are pleased to be of help, Tiana.

As a final interesting note with this tale……

The daughter of the German NiFi pilot who shot this crew down, Herr Richard Launer, is an artist. She is going to paint the photo that you have of today (2013), merged with yesterday (1944)! Imagine that? A photo of the crew shot down by her father, painted by his daughter, and given back to the crew’s family, 70 years later.

Once fierce enemies in the sky, and now great friends on the ground. War is crazy isn’t it?

All the very best, and thank you so much for this. I will tell everyone!!!

Over the next few weeks we will be featuring a series of “Mystery Pictures”.

They will all be related to York’s Walls, The Bars, Clifford’s Tower, York Castle and St Mary’s Abbey – but they will not be pictures of the more obvious or well known features of York’s wonderful heritage.

See if you can identify where they have been taken. Answers will be given on our FaceBook page. 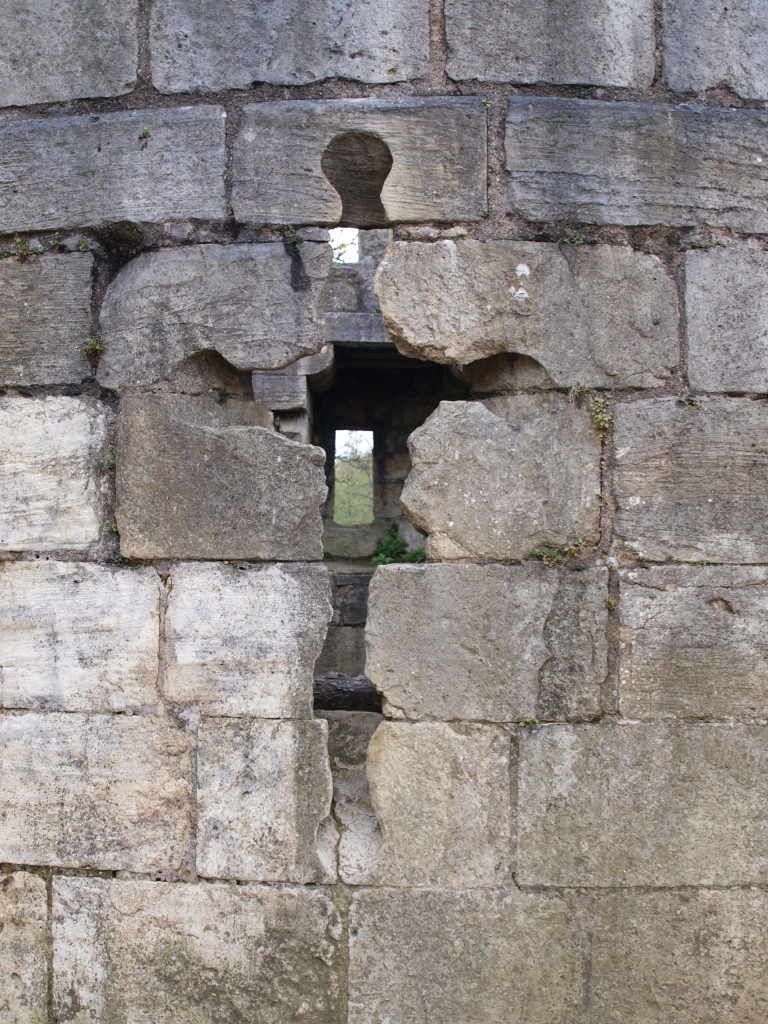 A group from The Friends of York Walls had a wonderful day out on a visit to the walled city
of Chester on Tuesday October 16th 2012.

FOYW have formed links with some members of the Chester Renaissance group and a day
visit to Chester was organised with their help. They entertained us with a guided walk & talk
around the walls, including entry into many places the normal public currently don’t have
access to.

The coach departed from York at 9.30am and after a wet drive via the M62 the sun came out
and we arrived at Chester in time for lunch and a short look around the city center. We met
up with Jane and Magnus from Chester Renaissance at the Chester Amphitheatre at 1.45pm –
and the weather was perfect.

Chester Renaissance have recently been spending over £2M on major restoration work
around their City Walls and have included many innovative improvements to make the walls
a major tourist attraction. The result of the work should be an inspiration for York and to
FOYW – if only we could get some of the same European Grant money!

We walked the walls in an anticlockwise direction and looked in many of the restored towers
not presently open to the public. By 4.30pm our weary group arrived back at the Chester
Castle and Little Roodee area. We departed from Chester at 5pm for the evening return to
York.

We would like to thank Jane Hebblewhite and Magnus Theobald of Chester Renaissance for
their time, their interesting talks and their guidance during a wonderful afternoon, and for
giving us the opportunity to see the results of all the recent work on the Chester City Walls.

Some photographs taken on the day can be seen below and more at our Flickr Group.

If you took any good photos on the day please share them with us on the Friends of York
Walls Flickr Group here (add the tag “Chester Visit”).

The Chester Renaissance website can be viewed here. There is an interesting article on the restoration of the walls here. A summary of a Chester Walls Walk can be read here in an article published by Cheshire Life in March 2007. 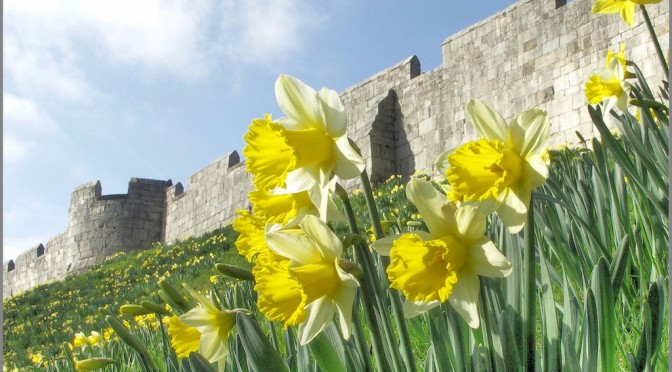 The Friends of York Walls invite you to share your photographs with us on our Flickr Group.
You can view the existing “group pool” of images via the above link, and you are welcome to join the group to upload your own photographs. Normal Flickr account rules apply.

Images must be related to York’s Defenses – including the Bars, the Walls, St Mary’s Abbey, Clifford’s Tower and The Castle. Images related to Friends of York Walls events and activities are also acceptable.

Here are a selection of the latest contributions to our group.

To view more, head over to our Flickr page here. 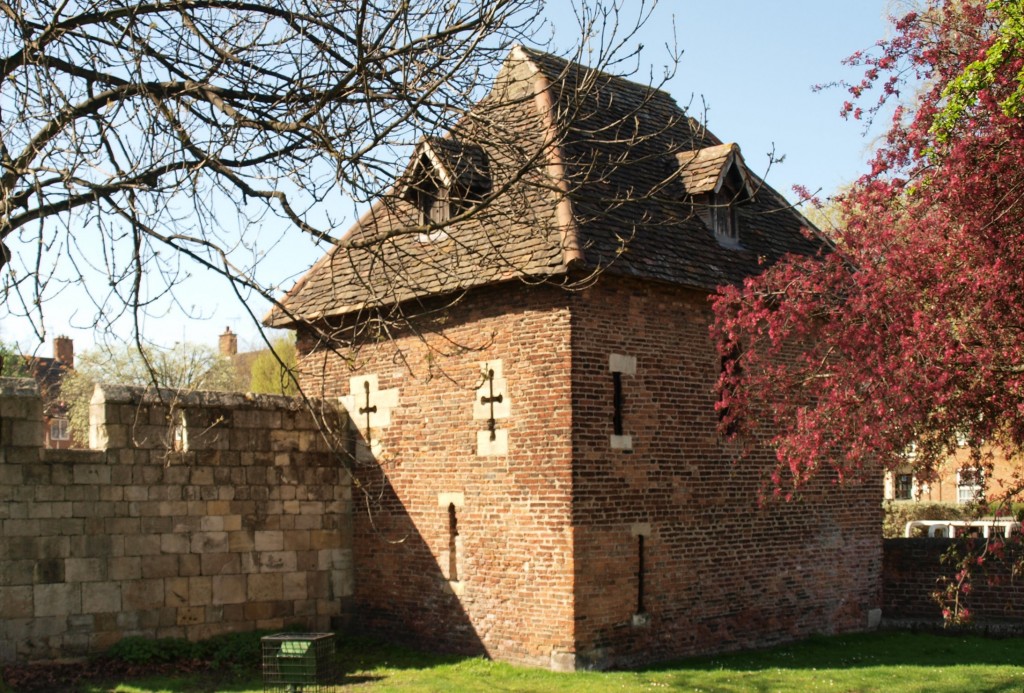 On Saturday 14th July 2012 The Friends of York Walls escorted the Lord Mayor of York Councillor Keith Hyman, and Mrs Karen Hyman the Lady Mayoress, on a walk along some of York’s historic walls.

The civic party was first entertained by the York Concert Band on the front lawns of The Kings Mansion before setting off on a “walls walk” through the Museum Gardens to Lendal Bridge and the start of the city walls. There they were entertained by a busker and given tea and biscuits courtesy of the Cedar Court Hotel. More buskers entertained the walking party at Micklegate Bar and then at the Bitchdaughter Tower where the party was given wine and biscuits. The walls walk finished at Fishergate Postern Tower when the civic party sponsored a stone and climbed the spiral staircase to view the upper floors. Throughout the event collections were taken in aid of “The Lord Mayors Charities”. 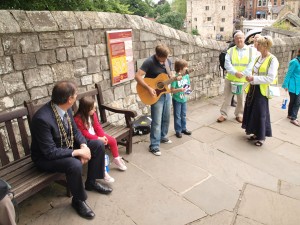 More photographs taken during the event can be seen here.

The Red Tower Fair on 7th July was blessed with a rare event this summer, a warm and sunny day.

The Friends of York Walls in association with the local residents provided stalls, games, entertainment, activities and refreshments. A good afternoon was had by all.

Photos of the event can be viewed here.

If you missed the Red Tower Fair we will be doing it all again at Tofts Fair Bishophill, inside the walls near to Victoria Bar, on 21st July from 12 – 4 pm. 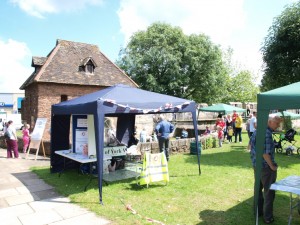